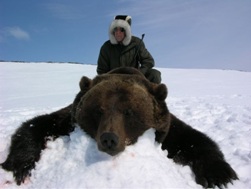 Hunters arrive in Magadan and fly to Omolon on the charter plane (included in the tour cost). After the flight we use boats to transfer hunters from Omolon to the basic hunting camp.

Hunters stay in the basic tent camp. There are log heaters in each tent. Alongside with living tents there are: dining room where professional cooker serves the meal, electric generator to supply electric power and light in the evening. Hunters could use banja to take shower with hot water.

Satellite phone is always in the camp. Fly camps are used for staying out of the basic camp for several days (if necessary). Camp manager is in charge of order in the camp.

During the hunt we use motorboats «ZODIAK» type with the engine YAMAHA-50 (if necessary) to get to the areas in the radius of 15km from the basic camp. The main method of hunting is stalking.

Fishing is possible during the tour. Fishing object are: different types of salmon; grayling, malma in the rivers; flounder, perch, crabs in the sea. 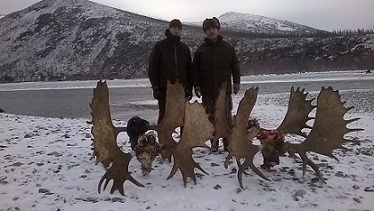 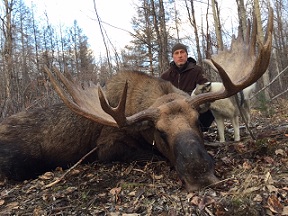 Tour cost with helicopter transfer to the hunting area back is calculated separatly and depends on the quantity of hunters in the group.

Notice: Rates are a subject to change due to the possibility of the license tax increase imposed by the local government.

We spent 10 great and exciting days in the spring of 2018 hunting for coastal russian brown bear in the Magadan area (east Sibiria).

From Magadan airport we were immediately transfered to the base camp at then Babushkina Bay about 60 miles east from Magadan by helicopter (about 50 min). The basic camp was located right at the shore overviewing the Ochotskoe sea partially covered by iceblocks. With the weather changing it’s face every hour, from sunshine to rain and wind, we had to postpone the transfer to the spike camp for the next day. Since the weather cleared up, all the equipement and food was put in Zodiac boat and off we (Sasha the guide, Martin a birdwatcher and me as a hunter) went along the shore another 50 miles east. 5 hours later which gave us the sight on about 60 bears the cosy cabin in the spike camp allowed us to warm up, have a nice dinner and some sleep, The following days we filled with patroling the coast by Zodiac and spotting bears. After a small strech of gravel beach the cost goes steep up about 450 feet. That’s were the bears loiter around. After identifying an adequate target, we jumped on the shore and followed stalked it until it could be taken.

Besides the bears we saw an abundant variety of birds (tuffed puffin, stellar’s sea eagle, shore birds, ducks, geese and many othes), sea lions and whales. So, we had an incredible experience in an overwhelming nature! The organisation was perfekt as were accomodation, food and transfers.

I am longing to come back. 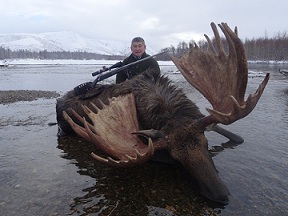 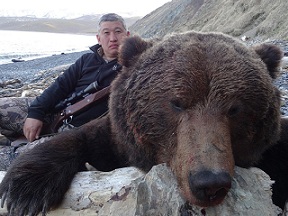 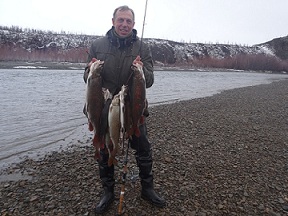